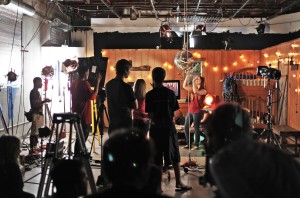 There was a noticeable difference between the first and last day in all the students that attended our D-PAN workshop last year. When the students arrived they were excited, but nervous, not exactly sure what to expect. They knew that when the weekend was over, they would have created an ASL music video, but they didn’t quite know how they were going to accomplish it. By the end of the weekend the students were beaming with pride and self-confidence. Even their parents mentioned they noticed a difference in how their kids carried themselves. Unlike many weekend excursion experiences, this wasn’t just about fun; this was about showing the world what an eager, motivated and passionate mind can do when encouraged to challenge themselves.

After the brainstorming session, we had a full group session. All those wild and crazy ideas they had…how do you make them a reality? That was one of the first lessons the kids learned that weekend. The thing with film is, those wild and crazy ideas are encouraged, but it’s the execution behind them that takes effort and determination. ‘How to make your vision into reality’, a lesson that goes beyond film.

After the kids chose their roles (production, performer, editing) they were separated and given a crash course on their roles. Thus ended the first day, and the kids were excited and ready to get to work the next day. The next morning started out with a recap of the previous evening and the beginning pre-production stages. The chosen directors had to create a story and structure the music video, one of the heavier tasks of their day. Just like a real film set, there was a lot going on at once; students were practicing ASL, setting up lights, discussing the next shots, and bonding with each other. Even during their lunch and snack breaks they were talking about how to make the next shot better. After 12 hours of shooting, performing and editing, they had a solid rough edit. They also had something else:

With the day started in uncertainty for them – the question “how are we going to do this” was frequently asked. We guided them through their questions and helped them find the answers they needed. No disco ball? Let’s use the sparkly shirt of a student as a substitute, too late to capture the sunrise… let’s do some light effects to mimic a sunrise. The lesson learned was how to utilize the tools you have to solve the situation at hand. By the end of the day, all of the instructors had a hard time keeping up with the students as they were taking control and setting up shots and eager to move on to the next. Their confidence was already beaming. They were able to answer their own questions, and in turn it encompassed them. Students were thinking twice before they answered questions or provided answers, assessing the situations – they were in control, and most of all they were confident. Not just with their newfound skill-sets, but they were confident with their identities, as young adults, who happened to be Deaf and hard-of-hearing.

What makes us even prouder is that multiple students from these workshops have gone on to create their OWN ASL music videos, with viral success. When you show kids the potential of their ability, there are no limits to what they can do. Encourage your child to pursue their passion, even if someone else told them they couldn’t do it.

You can check out the D-PAN video with students from the workshop here:

In March (March 28-30 2014), the Deaf Professional Arts Network, also known as D-PAN is hosting its third annual ASL music video workshop for Deaf and hard-of-hearing youth. The camp takes place over the course of a weekend in Brooklyn, Michigan at the Holley Family Village. Twenty five lucky students ages 12-17 will spend a weekend, working with the D-PAN team (who has created over 25 music videos) learning how to create, direct, translate, perform, and edit an ASL music video.

My daughter Lauren, her friend Lauren Holtz, and my son Steven attended last year’s D-Pan Music Workshop and they had a blast. The girls had attended a previous camp with Sean and recorded “We Are the World” in ASL.  My son was attending for the first time and he wasn’t too happy that I was making him go–but I wanted him to get out of the house and away from the computer.

Wow, what a transformation for my son! He gained so much confidence and several new friends from the event. It was a thrill to see him up on stage introducing the Fireflies video to the audience.  My shy kid was on stage– speaking to a group of people!  That’s the benefit that D-PAN gives to the kids they work with it– a sense of empowerment and confidence.

After the workshop, the two girls started a YouTube channel featuring music and ASL:  Ren and Keely.

D-PAN has released a new DVD featuring a variety of music videos. Not only does it include original videos by Sean Forbes as well as the Fireflies video– it also has a rocking gospel video as well.