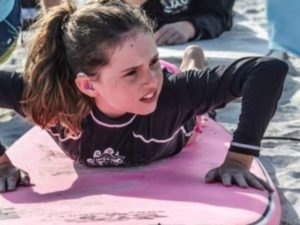 As I stepped out of the car, my feet felt the sand. It seemed to express a revolt from my sandals as it gathered on my feet and wriggled underneath them. The sensation was so foreign compared to the sand-less climate of Pittsburgh that I had grown up in. The sand had demonstrated an abnormal desire to worm its way onto every floor, into every crevasse, onto all articles of clothing, and to my own personal annoyance, into the heart of every lock of hair. But in my youthful nature, I was heedless of the ubiquitous sand that my feet sank into at every excited prance, slowing me until it seemed that I was in a nightmare where the ocean waited just out of reach because I was simply running in place.

Despite the baleful sand, I flopped down on a pastel pink board that was laid on the ground by people in wetsuits. They orbited the board methodically, stopping to congregate around my parents, the perfect contrast to how I had sprinted through the same area.

I sat up, not to observe the conversation my parents were holding, I little cared for that. I looked at the other boards that I had neglected. Mine was by far one of the thinnest. Broad boards laid scattered around, interspersed with pink boards like the one I currently occupied. I embraced my pink board, glad for the skinny width and for the color that, being a little girl, occupied its place in my heart as my favorite. My cheek flat against the board, my hearing aid boring into my head as I wedged it between the surface of the board and myself, I watched with a mild interest as my parents conversed with the people in the wet suits. I raised my head lazily as my mom broke away from the group and neared me, seemingly unperturbed by the pernicious sand.

She recounted the conversation as I listened with the same mild interest I had exhibited before. Then, she produced a pamphlet that had been given to her during the conversation.  It showed a diagram of a person swimming in the ocean, as I was about ready to be, with arrows in assorted colors, all pointing to illustrate a different current, stroke, or something else I little cared for. My mom explained that the diagram elucidated what to do should I become caught in a rip tide. She asked if I understood. I understood what to do, so I answered with a simple yes. I understood that I should swim parallel to the current, that I should wait out the current, but the sweet innocence I possessed at the time didn’t understand the idea of a riptide. I understood that it was deadly, but I didn’t believe it, not really. I didn’t distrust the advice. I just didn’t attach any weight to it.

The only thing that had any allure for me in that moment was the ocean that churned and crashed on the horizon. Excited to wade into the inky blue, I began to pull my hearing aids from my ears, stopping as my mom told me the people in the wet suits would want to talk to us (several other kids had arrived by this time) before we would plunge into the ocean. As far as I was concerned, the only practice I would need with surfing I had already gotten from my neighbor’s old see-saw. I would scramble up on it and tip back and forth until one of my parents came to disengage me from the task that I had set myself to.

The lesson came soon enough for my restless soul. I sat with a feigned patience as the instructed explained, as my mother already had, what to do in a riptide. Then they explained how to pop-up. They laid on the board, chest on the rigid plastic, as if to do a push-up. Then, they did push themselves up, springing their legs underneath them and spreading their arms out, so they almost looked as if they were trying to imitate a hawk, circling, circling, circling. I put my arms to either side of my chest, pushed myself up, felt an exhilarating rush as my legs were suddenly there to catch me, and thrust my arms out to the side just as hawkish as was shown to me.

They said to do it again, which I readily complied to. Then, we did it again. I soon tired of the exercise, and again yearned to embark on the sea. My instructor came to me introducing himself as Matt. I said “hi” displacently, complaining to my mom that I wanted to go surfing. She looked to the instructor as he said that he was ready to take me out. My hearing aids were out before I knew what I was doing. The instructor was still talking, but I didn’t hear. The world was silent. Oh, so peacefully silent! 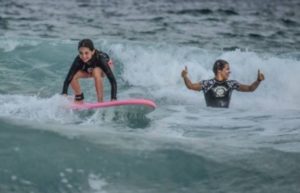 “Go. Go. Go.” I was on my feet as the wave fizzled around my board. The smell of salt nipped pleasantly at my nose. I could taste the rushing sea air on my tongue. The blue was calming. The board was steady beneath my feet. The world was silent. The wave did not crash as it should have on my board. It was oddly fitting. I felt at peace as the coast sped closer and closer.

The board began to slow. I toppled off. The brown murk swirled about me when I opened my eyes with a sudden jolt of panic. The sand tickled against my feet. The board passed over me. I felt the panic ebb away as it was replaced with a wonder. Even the board’s shadow was so serene. I loved it. I felt the leash tug me towards the coast much in the way any dog would. The board was no longer over me. My lungs began to burn, so I lifted my head above the water. Another wave came, causing me to stumble for the coast. My instructor waded towards me. Before he could open his mouth to utter a sound, I was imploring him to do it again. He made a comment to my parents that I did not hear. As I scrambled on the board, I didn’t care about anything except surfing again. And so, we did. 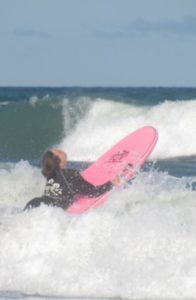 Every time he made a comment that I didn’t hear. I wasn’t bothered by this. In the past, anytime I had insisted to know the dialogue I found myself strangely disappointed. I didn’t know that he was impressed at my eagerness to do it each time. I still don’t know what my parents said in reply, but I do know the silence as I stood was amazing, refreshing as I smelled the salty air that can only be found on the sea. Without the sound, I had nothing to focus on but the amazing calm that only came when the sea raged around me, propelling me swiftly forwards. I didn’t mind not hearing. Even just for that moment, I was glad for it.

And I never did encounter a rip tide.

Julia Resciniti was diagnosed with moderate sensorineural hearing loss just before her third birthday. She’s currently in seventh grade at her neighborhood school where she’s been on high honor roll every marking period. Julia enjoys reading, sewing, and listening to music.

Julia is the subject of her mother’s book about parenting a child with hearing loss, Magic Ear Kids, available in print and kindle editions from amazon.com Magic Ear Kids. 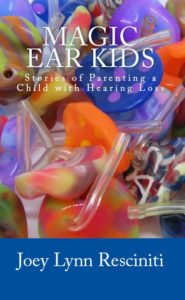