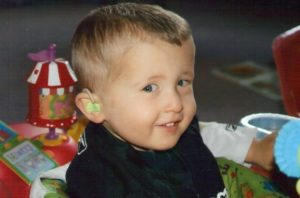 At birth Jaden had a hearing test like all newborns in our state and he failed; two weeks later he had a repeat test and he passed (or so we were told). The next several months went by without incident but at about 9 months, I felt he was not developing the way he should. Jaden was making milestones but later than most kids do.

At Jaden’s one year check-up I brought up my concerns to his pediatrician. it was shortly after this that Jaden began Early Intervention services.  Jaden began basic skills, physical and speech therapy.  Closer to 2 years of age Jaden also began occupational therapy.  Jaden’s days became filled with what I call “structured play”; every day of the week sometimes more than once a day, Jaden had one therapy or another.

It was by accepting the fact Jaden was not quite where he should be and by being willing to allow professionals into our home that we were able to start getting Jaden caught up.  He went from a boy not walking to one who could take steps and eventually run.

With the help of his therapists Jadan was making progress in most areas but his speech had not shown significant improvement.  Between 1 and 2 years of age, Jaden had 3 hearing tests all of which came back inconclusive.  Just after his 2nd birthday Jaden had an ABR and that is when we found out about his hearing loss.  Jaden has a severe to profound hearing loss in his right ear and a moderate hearing loss in his left ear.  He was fitted for hearing aids the same day he was diagnosed.  That day I was not upset; rather I felt relieved and almost vindicated.  I knew there was an issue and now I had the answer; we could begin to help Jaden in ways that we had not helped him before.  Finding out about Jaden’s hearing loss is what I call the first half of the puzzle that is Jaden.  His hearing loss did not explain all of his quirks, such as low muscle tone and feeding issues, but it did explain why he was not talking.

Within a week or two of Jaden being diagnosed we were put in touch with a teacher of the deaf for infants; she was a blessing to our family.  She began working with not just Jaden but our entire family once a week and what a difference it made!  Jaden started picking up signs right and left; especially signs for his favorite things like milk and cookies.  Now that Jaden had hearing aids, with the help of his speech therapist, his speech began to improve too.  Okay, so he was not talking yet but he was babbling which is something he had not done before.

In January of 2010 Jaden started at Little Listeners Pre-K class at the NYS School for the Deaf in Rome; since then there has been no looking back.  Sending our not yet 3 year old son on a bus to a school about 30 minutes away to attend a full day of school was an adjustment for the entire family but it has been one of the best choices we have ever made for him.  Jaden was in a small Pre-K class with a wonderful teacher and teacher’s aide.  At school Jaden also continued to get speech therapy from an amazing therapist every day of the week along with getting occupational and physical therapy both several times a week from great therapists. 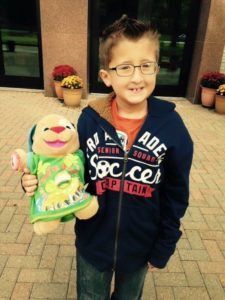 It is with the help, knowledge and daily communication that our family had with his team that blessed us with a whole new little boy. During his pre-k years with the help of his teacher and speech therapist Jaden went from a boy whose number of words could be counted on one hand to one who talks and talks and talks.  I never thought it was possible but there are days I crave silence; what a wonderful ‘problem’ to have!

When Jaden was almost 4 years old, he was diagnosed with a genetic condition called 22q Deletion Syndrome; this is the 2nd half of the puzzle that is Jaden.  We are fortunate in that Jaden does not have many of the health issues that others with this condition do.  Though this was not something I considered to be good news, it is something we are fortunate to know for it explains many of Jaden’s quirks; such as feeding issues which he no longer has and weak muscle tone and fine motor skills which we now know he will likely always have. 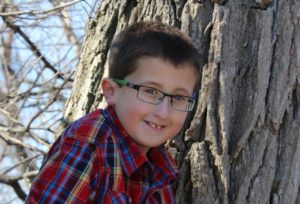 Over the past several years Jaden has blossomed into a funny, smart, confident and witty little boy in large part thanks to the knowledge that we have been fortunate enough to find out about him and being willing to accept the help and information that others could give us.

Today Jaden is 9 years old and in the 4th grade. Jaden’s newest adventure began in September of this year. Jaden has entered a mainstream school setting in our local school district (New York Mills).  We are fortunate in that Jaden has many of people rooting for him. Our family has had and continues to have tons of support from individuals that have worked with Jaden in the past as well as those that are new to his team. Jaden seems to be settling in nicely to his new school and he’s even joined drama club and band. I’m sure there will be some bumps in the road as Jaden embarks on this new journey however, we have every expectation that Jaden will continue to thrive and excel at his new school.

I think Jaden’s story shows that the saying “Knowledge is Power” is so very true; accept the knowledge that others can give you about your child, embrace it and use it to help your child.  For our family, it is the knowledge that we have been given about Jaden, both good and not so good, that has allowed us to help him become the wonderful boy he is today.