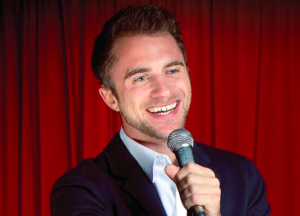 D. J. Demers is a comedian who is known as “The Hearing Aid Guy.” D. J. appeared on America’s Got Talent in 2016 and twice on the Conan show.   D. J. recently wrapped up a 30-day Hear to Hear Comedy Tour.

D. J. suspects he was born with some loss of hearing. He had chronic ear infections as a child and received hearing aids when he was four.  “My parents encouraged me to be proud of my hearing aids, ‘don’t be shy, don’t hide them,’ but I was different from most other kids,” D. J. explained.

D. J.’s memories of his school days were positive ones as he remembers hanging out with the cool kids who accepted him. He was active in sports, which presented challenges whenever his hearing aids met an outpouring of sweat.   “I was always scared that if I sweated too much, my hearing aids would die, and that caused me some embarrassment,” D. J. said.  “I  learned some coping skills–I realized if I played outside and then went inside, temperature change would make the sweat worse,  so I learned how to alleviate that–I  would stop five minutes before the bell and then cool down before going in.”

D. J.’s defining moment came when he was just ten years old while on a bus to a baseball tournament. He turned to a friend and said, “I’m going to a be a stand-up comedian.”

Even while giving his high school valedictorian speech, D. J. mentioned his dream of becoming a comedian.

But his mother had other advice: go to college and get a business degree.

Even at university (D. J. is from Canada), D. J.’s mind was still on comedy. In between his studies, D. J. read book after book about other comedians–Richard Pryor, Jerry Seinfeld, George Carlin, to name a few.

“There’s no clear path to become a comedian,” D. J. said.  “By reading their books and getting a sense of their path and struggles, that gave me enough hope that I could give it a shot–it didn’t seem like it was out of reach.”

During his second year at university, D. J. drummed up the courage to pursue his dream.

“I felt the itch to get on stage and give it a shot, so I called into the comedy club in Toronto–you have to call and leave a message and then later that same day you call again to see if they chose you.   For four weeks straight I didn’t hear my name when I called in. I was upset and sad, but a little relieved–‘thank God I don’t have to do it.’  The fifth week I called in and the message said ‘D. J. Demers.’   Oh s%&t! I have to do it now!  I lived an hour away–I went and did a five minute set. I was immediately hooked. The first person who laughed made me realize ‘this is what I want to do! I want to make people laugh!’  I only had a few laughs, but it was enough. I stayed with it. 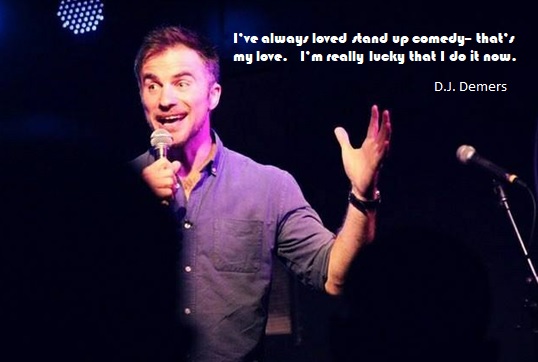 D. J. pressed on, doing open mic nights and getting booked on small venues for seven years. His big break came when the Conan Show reached out and invited him to perform. “I had a fun set, people seemed to enjoy it,” D. J. recalled. “That was the first time I had the feeling of ‘maybe I can do this for the rest of my life.’ My mom was in the audience–it was the first time she went to L.A.  It was a big turning point for me in my life and it’s something I will remember forever.”