“They gave up on me… Told me I should just quit… They didn’t call my name. Told me it was over. But I’ve been deaf since I was three–I didn’t listen.” 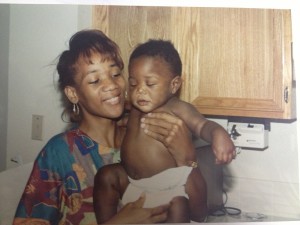 Derrick and his mom, May

Derrick’s mother, May Hamlin, remembers the early years of Derrick’s life as challenging ones. Derrick was two when his parents noticed a delay in his speech and language skills. An audiogram showed hearing loss in his left ear which eventually progressed to a profound loss in both ears. “When we found out, I was like wow, this is heartbreaking, how am I going to do this?” May said. “I put my trust in God–He guided me and directed me with everything.” 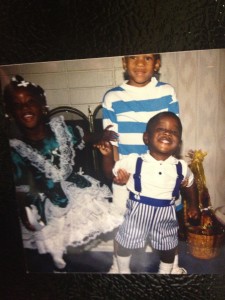 Derrick and his siblings

In the early years, Derrick wasn’t fond of his hearing aids and often pulled them out or refused to wear them. His parents and teachers worked together to convince Derrick to keep them in. A few kids began to bully and tease him in elementary school, calling him, “Four Ears.” May went to the school several times to address the bullying issue and create awareness among the staff and students. She was determined to protect Derrick, but at the same time, she wanted to build him up to withstand the challenges and move on to success.

“Yes, you are different–that doesn’t mean you are less than,” she told her son. “You are no different than someone who has glasses. You have hearing aids to help you hear  If anyone can’t accept you with hearing aids, you don’t need to be around them. If someone doesn’t like you, move on. Don’t stay in that place where you feel sorry for yourself.”

Derrick’s confidence and self-esteem grew and he found he had a natural talent for sports, although he had a shaky start. His first foray into sports began with T-ball. Derrick had so much energy as a young child that it was difficult for him to stay focused during the game. The hyperactivity he exhibited ended his involvement with T-ball when a coach declined to invite him back to the team. “When I look back at that time, I realize the hyperactivity was because he couldn’t hear,” May said. “No one took the time with him. That’s where all the acting out came from.”

Sports continued to be an outlet for Derrick and others began to notice. Derrick found his niche with flag football.  When Derrick’s older sister began cheerleading for a Pop Warner football team, Derrick begged his parents for the chance to play tackle football. Both May and Derrick, Sr. were concerned about the possible progression of hearing loss with blows to the head. A visit to the doctor and a subsequent MRI gave them some reassurance that the sport would not affect Derrick’s hearing.

Football was challenging for Derrick at first. The hearing aids were giving him feedback every time he put on his helmet and they frequently shorted out from sweat. Scarves, tape, headbands–nothing worked. Derrick tried playing without the hearing aids, but found himself even more frustrated on the field.

Then May had an idea. She took a pair of pantyhose and snipped them to fit. The nylon did the trick, keeping the moisture out and allowing Derrick to play without feedback.

While Derrick’s talent continued to grow, he found himself being held back by well-meaning coaches who simply couldn’t see beyond the hearing loss. “Derrick had to fight for what he wanted,” May said. “He worked extra hard, running up and down hills to condition himself and following a special diet to keep his weight within limits.  He never missed a game because of his tenacity and drive.”

As a freshman in high school, football took on a whole new level for Derrick. Everything kicked up a notch–the training, the plays, the coaching, and the communication challenges. Throughout it all, May kept encouraging Derrick to face every adversity. “I don’t care how you do it, you get yourself in the front of the pack,you look at the person when you can’t hear and don’t be ashamed don’t be shy,” she told him.  “You advocate for yourself and ask them to repeat what they say. when you do, people will respect that and adjust for you.”

The advice worked. Derrick wasn’t shy about pulling down a helmet to read the quarterback’s lips before a play. He carried the same assertiveness with him all throughout his four years at UCLA. It wasn’t long and the scouts began to take notice of Derrick’s athletic prowness on the field. The phone was ringing off the hook and there seemed to be a promise of a draft pick on the horizon. 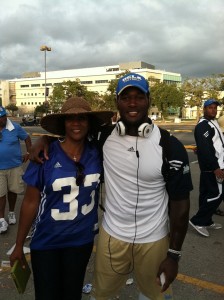 Derrick and his mom

None of that happened, but the calls continued to come in. Derrick had two teams offer him different positions and he took the running back position with Minnesota. It wasn’t long before they cut him from the team and he was back to square one. “Derrick felt down, but he got right back up,” May said. “I reminded him it was God’s purpose not to have him there.”

Derrick went back to his high school and began to volunteer with the football team and to continue to train. He pursued every football opportunity he could. Finally, another offer came, this time from the Seattle Seahawks. The day Derrick called his mom to share the news May yelled so loud she was pretty sure the entire neighborhood heard her joy.

The first year with the Seahawks, Derrick was on the practice squad. He knew he had to put in a lot of hard work to make his NFL dream become a reality. “Derrick had to tell the team, ‘Yes, I’m deaf, but it doesn’t dictate who I am and how far I can go.’   The team saw that–they saw his determination, they saw what he could bring to the team and that speaks a lot about their organization,” May said.

The Seahawks fans are known to be the loudest fans in the NFL and that’s where being deaf becomes a blessing. The roar of the crowd and the noise are not a distraction to Derrick–he can tune all of that out and keep his focus on the job at hand.

Over the years, Derrick returned to the classroom to speak to deaf and hard of hearing students. “The kids hang on to his every word,” said Nancy Adzovich, an educational audiologist who worked with Derrick since third grade. “Derrick is very outspoken about communication needs and he encourages the students to speak up and advocate for themselves. He was always very honest with his responses and I think the students appreciated that.”

Derrick  exploded into the spotlight when Duracell released a commercial featuring Derrick with his hearing aids on full display. The commercial caught the attention of 9-year-old Riley Kovacik who wrote a letter to Derrick: 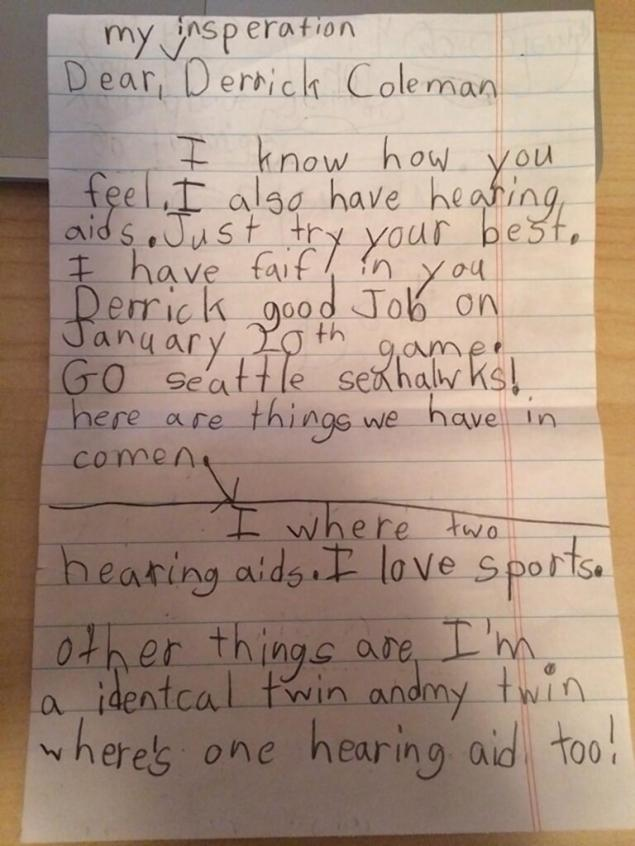 Derrick took the time to write the twins back. “That’s Derrick,” Nancy said. “Before all of this fame hit, May taught Derrick to always give back. When he was a freshman at UCLA, I asked him if he could come and talk to Noah, a seventh-grader who was being teased and bullied in school. Derrick spent three hours with Noah, answering all of his questions and provided encouragement. What a humble gift he gave.”

As for the Super Bowl, it will be the first time in history that a deaf player is playing on the offensive team in a Bowl game. “For all the adversities, all the challenges, all the struggles– it’s been with God’s blessing that Derrick is where he is today, going to the Super Bowl,” May said. “So for families with deaf and hard of hearing children, I just want to say, embrace the challenges you face, but don’t make excuses. The world will perceive your child the way you perceive your child. Parents need to instill the same dreams and values as they would a hearing child.” 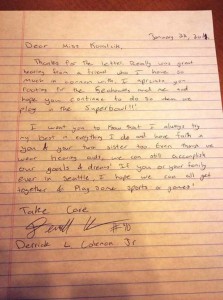 3 thoughts on “The Parenting Side: Raising Derrick Coleman”