Menu
No Comments
Thoughts on Parenting a Deaf Child 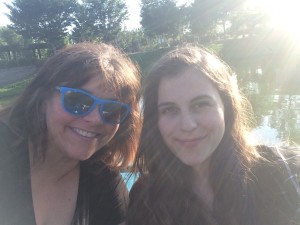 From the moment our kids are born, our parenting journey is one of letting go.

Letting go is hard. Letting go means we’re no longer in control of the parenting stuff.

When my daughter called me earlier in the spring, she informed me she was no longer going to pursue the college path. Her heart was set on acting and she wanted to find a way to pursue her passion.

She didn’t really have one. She was going to come home after the semester ended and figure it out. She might move to New York City and live with her cousin. She might try and get a job in Los Angeles and live with a friend. She just knew she wasn’t going to go back to college. Acting school, maybe.

As a parent, I wrestled with a whole range of emotions.  The parent side of me screamed, “oh-my-gosh-she’s-gonna-have-a-tough-life-without-a-degree!” The Passion Coach side of me calmly whispered, “let her have her journey, she’ll figure it out.”

My conversations with my daughter showcased the whole range of those emotions and thoughts. During one conversation, I was calm and rational, even positive. During other conversations, I brought out the “play it safe” cards and the “get your degree first–after that you can do whatever you want” rationality. I think I said some not-so-nice things.

“How can you tell others to follow their passions if you won’t let your own daughter follow her heart?” she asked me.

Yes, she called me on it.

And she was right. I had to let go. This was her journey. Even if I pulled the parenting card and insisted she stay in college, I knew it would create the biggest thorn between us. She had been miserable with school since fourth grade and we had plenty of battles over it.

As the end of summer rolled around, the plan was still unclear. My daughter even had moments of self-doubt, of wondering what direction to go in next.

Then out of the blue, she found an audition for Spring Awakening on Broadway. Without a single bit of hesitation, she booked a flight.

The moment she FaceTimed me to tell me the news, a swing role on Broadway, I suddenly understood why this process of letting go is so important: it’s the only way to grow. 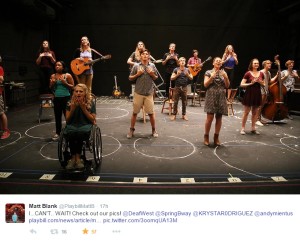 I’m all too aware it could have gone the other way and the journey would have taken another twist and turn. That’s how it works, that’s how life unfolds.

Karen Putz is a mom to three deaf and hard of hearing kids. She resides in the Chicago area and is the Co-coordinator of Deaf and Hard of Hearing Infusion at Hands & Voices.

More about Spring Awakening on Broadway:

Deaf West Makes Spring Awakening All Its Own