It’s always exciting to try new things, but I never expected a rude encounter to come with it…

After a week long conference, a group of us wanted to get out and try “Chicago’s favorites.” Karen Putz, Co-Director of DHH Infusion, lives in the Chicago area. Anita Dowd and Virginia Moore from the Kentucky Commission for the Deaf joined us. We grabbed lunch at Lou Malnatis pizza. Karen kept bragging about Garrett Popcorn Shops and told us we had to try it.

We didn’t have much time before we had to be at the airport.

“I’ll pull up right in front of the shop and you and Anita can get the popcorn while we drive around,”  Karen said.

The plan was to be in and out of the shop and then on our way with the amazing popcorn we just had to try. 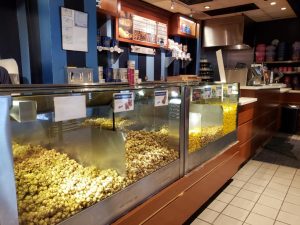 As Anita and I walked into the shop, I noticed it was empty. It was a perfect time to ask for samples. We had never been to Garrett’s and they had five different flavors to choose from. Anita pulled out her phone to FaceTime her daughter to ask what flavored popcorn she wanted.

As I was talking to the young lady behind the counter, a man walked into the store.

“Go ahead and help him. We are still not ready.”, I told her. The lady asked the man to go around us to the register to take his order.

“Excuse me”, he told Anita.

“Excuse me!”, he said again a bit louder.

“I’m sorry, she’s Deaf”, I said as I turned around and noticed Anita was focused on her phone with her daughter.

I was upset and insulted with the man’s reaction. As I looked at Anita, I realized she still had no clue what was going on.

At that moment, I became angry.

I have a seven year old Deaf son and this is the ignorance he will have to deal with. Anita had been signing with her daughter the entire time. How did this man not think she may be Deaf? I had already tried to explain she was Deaf. Why would he decide to be so rude? How does anyone have the heart to treat someone this way?

My heart was immediately broken.

Not just for Anita, but for every Deaf or Hard of Hearing individual out here, including my Deaf son, Markie.

The man rudely got around Anita as he replied, “Its not my f&%$* fault she’s Deaf”.

I became very emotional and started to tear up. Anita looked up in confusion and asked what was going on. I briefly and quickly tried to explained to Anita, but the man continued to yell out comments. The security guard approached the man and asked him to calm down. The manager of the shop came out from behind.

To our surprise, the manager knew some signs. Not much, but enough to make Anita feel comfortable and take her order. All of the Garrett’s employees were kind and kept asking if we were okay. They showed compassion–and kept apologizing for the man they didn’t even know. 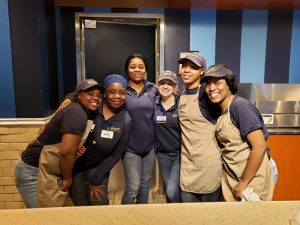 The man left the store, but he left me upset. I had heard many stories over the years, but I had never experienced anything like this myself. The incident didn’t involve me, but it involved my friend, my Deaf friend. Someone who has lived life being Deaf, someone just like my son. I am afraid for the day my son is mistreated simply because he couldn’t hear. The man was right. Anita being Deaf was not his fault, but it is not Anita’s fault either. Being Deaf may be a challenge in today’s society, but its not a bad thing. What is bad, is when someone thinks its okay to be disrespectful to someone simply because they are Deaf.