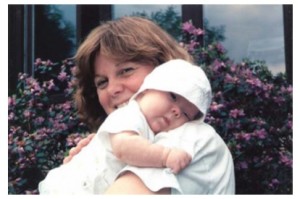 “Well, it looks like he has Down syndrome”, said a medical professional I hadn’t met before. With Apgar scores of 2 then 5, no one was dancing in the delivery room. Well except for me, in my mind anyway.

When I attended my first support group for babies born with Down syndrome, I was told “at least we have a diagnosis from birth that we can work with”. Really? Little did I know that autism, silent aspirator, hypotonia and hard of hearing would all follow as his little life began.

At a year old, Chad’s special education teacher suggested we learn sign language. I remember her teaching him the sign for ‘more’ using a musical top. He learned the sign after three or four introductions because it meant more spinning and music from the toy. The teacher didn’t provide any further sign language lessons or instructions. My sister had a book on signs tucked away with her old college textbooks. She pulled it out and as best I could, we began learning ASL on our own.

Where to start? I thought since kids like animals, I’d start with that. My son would learn five to six signs every weekend – not bad since as a single parent, I was working 40 hours per week. He remembered the signs and before long, he was relying on them for his main mode of communication. This began to present a problem however. I noticed that if someone didn’t have signing skills, he wanted nothing to do with them. This brought about horrible behaviors if he wanted to communicate something and wasn’t understood. I suffered two black eyes, a bloody lip, holes in the walls, a broken window, etc, too numerous to mention. I was learning how important communication for a non-verbal baby is!

I started asking for caregivers with ASL skills and found one or two between personal care attendants and educators. Whenever I could match him with someone he could communicate with, behaviors went away. But not many people knew the language. I decided to go back to school and finish my bachelor’s degree. With a sales background, I thought I would get my degree in marketing. As the bachelor program was coming to completion, I was struggling with my son’s school to give him language. It was nine months of regular meetings, I developed an ulcer and I am sure I wasn’t the only person who fell ill that year. The school suggested a communication device or using Picture Exchange Communication (PEC) system. For the most part, Chad rejected these and preferred the spontaneity of ASL. My frustration was so great that I decided I didn’t want any parent to go through what I did with language development. I wanted to give parents a tool they could use starting at birth and would put them in charge of language learning. I decided to somehow use this as my marketing project for my degree. After a lot of research on babies, literacy and language, I created Talking with Baby and the first book, Come Sign with Us, the Adventures of Potts and Friends was written. (Potts was the nickname I had given my son) The book won a Mom’s Choice Award for educational products in 2010. 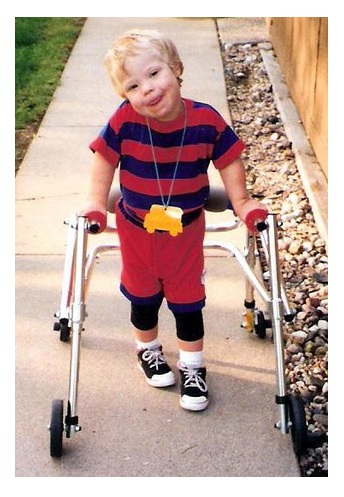 Despite a slow start, my son had 400 signs by 4th grade, learned another 200 before entering 7th grade. We know he has well over 1000 signs today. Learning ASL has given my son language and confidence.

Teachers asked me what I wanted for my son’s future. I always answered, “Give him a language!” What greater fulfillment in life than to interact with others. He started a day training program last summer

and I’ve never seen him so happy. We love ASL.

Tags: Adventures of Potts and Friends, ASL, Come Sign with Us, down syndrome, Marsha Peterson, Talking with Baby