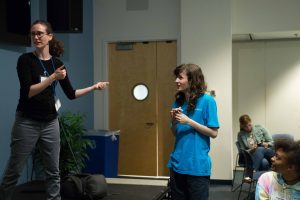 I am 16 years old. I am in the 11th grade, and I am in independent studies for the school year. I am studying for the GED test to take when I turn 17 years in the second semester of junior year.

I was born as Max, but today, I’m known as Mackenzie, or Macky for short. When I used to be a male, (from the time I was born up until I was 15 years old), I experienced a lot of bullying and teasing. I am profoundly deaf.  Some of it was intentional and I suppose some of it was unintentional. I have remembered every single bit of my dark times. I sometimes have traumatic flashbacks every once in a while. It might be a symptom of Post-Traumatic Stress Disorder–except that I haven’t medically received a mental health screening for that issue.

As I tell you, I’ve remembered most of my intense struggles. It all started of when I was five years old.

When I was in elementary school, it was hard. I was the only deaf child in my kindergarten class.  I grew up with Cued Speech. Cued Speech is a mode of communication that provides visual access in a very interactive way. It’s not a language, but a visual way to access English.

I am very strong-willed and stubborn and ambitious.  I think all of the societal and academic pressure that I’ve experienced have made me want to work even harder. I was sometimes oblivious of the fact that I was suffering internally. It continued until I was at about 15 years old.

I have repeatedly asked myself: “Why do people treat me like this?” “Why?” Sometimes I would feel a bit isolated.

I have always viewed myself as a outsider. But I’m not an outsider. I am now a person with confidence, a passion, and an enormous dream. Sometimes life can feel overwhelming. But I have some advice:  never give up on yourself. You are born to live, to breathe, and to experience things.

When puberty began, I was in sixth grade. The students in middle school became more cliquey, more cold, more rebellious, and more rough. They have became dramatic and manipulative, and even more aggressive.  People judge people for their appearance, relationship statuses, popularity, fashion sense, their rebellious habits or anything that’s different. There are negative and positive peer pressure that happens in adolescence.  Life became harder for me when adolescence came. I was in middle school. I was the only deaf person in a mainstream Montessori school.  It was really hard.

When I was in the 8th grade, I was thirteen. A teenager, finally. To be honest? I hated being thirteen. Being thirteen was one of the most horrible times that I’ve ever had. Why? I was so insecure. I was so shy and unpopular. I’m not close to anyone at all. I used the term ‘friends’ as acquaintances. I didn’t really care about being popular, but feeling lonely can feel intimidating.

While I was fourteen, I’ve decided to not have a interpreter, only because I wanted to become more independent.  I’ve deserved to become recognized as a person. I worked hard to get high grades. And I did. I’ve graduated junior high in the end of the school year. During the school year, I had been excluded a lot and it didn’t bother me until the spring trip. I requested to have my interpreter back, but the school refused.  I didn’t get an interpreter until sophomore year.  I wish I had an interpreter for my spring trip, because I deserved to be understood, included, and all of that. Everyone does, so yeah.

Puberty changed me so much in 8th grade. I had a three-inch growth spurt. At 13, I was 5’7. My face started to become more adult. I had leg hair, facial hair and grew an Adam’s apple.

Let me tell you something. I was a boy back then. Sort of. I thought I was transgender, but maybe I am just androgynous or non-binary. I’m still questioning myself right now. It can be overwhelming sometimes. But I know that I am LGBTQ. I have a gender identity and I have a sexual identity. I am sexually fluid. I feel a lot like a girl. I’ve started to grow my hair out, so I have two big curls at the end, and my hair is more wavy. I kinda look like a girl because of my figure, my hair, and the way my face is structured. The way I act, the things that I like.

(And you all should be true to yourselves, no matter what society thinks of that.) 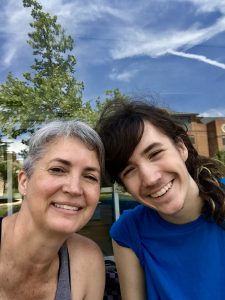 Fifteen. Fifteen is one of the depressing ages of all time. I was in the tenth grade.

When I was fifteen, I was previously taking two honors classes and  normal standardized classes. I had two interpreters. I had some hearing friends, and I would talk to them–small talk, actually. But it changed eventually. I was so angry. I was scared. I was so depressed. I was so suicidal. I thought back to the bullying, the teasing–I wanted people to regret what they’ve done to me. I wanted them to feel what I’ve felt when they’ve done to me. I wanted to choke them. But doing to them what they’ve done to me doesn’t work, because it wouldn’t do anything good at all. I know. Besides, life should be for doing much more better, than hating on people for what they did to you. It may feel like hate–but it’s actually all of the anger and pain that you’ve had in yourself.

A lot of teachers and adults tried to persuade me into making use of  hearing assistance devices. I was so infuriated because I felt that audism was happening.  Do you know what “audism” means? Internalized or dysconscious audism is the degrading belief that hearing people are superior and that deaf people are inferior.  I know that some hearing people try to put themselves in our shoes and try to be open and respectful. And to be inclusive, as well.

I started to make my own decisions. It was intense, but I stood by my own beliefs.I take after my mother’s stubbornness and tough attitude. I became so much more confident, ambitious and assertive. I wasn’t mean, actually. I was very direct with people. Sometimes I can be too assertive when I tell them to stop and didn’t even realize it.

I got to the point where I became done of dealing with people who would just treat me differently. I don’t really go to a public school anymore, I’m in independent studies, so that means I’m not a kid anymore! I’m not a pushover, a victim, or anything labeled like that. I am just deaf. That’s all!  I am a leader, an artist, a creator, and a manifestor.