Irene Taylor Brodsky is the daughter of deaf parents and a mom to a deaf son. She’s also a Oscar-nominated (“The Final Inch”), Emmy and Peabody Award-winning filmmaker. Her newest documentary, Moonlight Sonata: Deafness in Three Movements, will be shown in theaters this fall (Moonlight Sonata Screenings and Events) and on HBO at the end of 2019. The film will be featured in Denver, Colorado (home to Hands & Voices headquarters on October 11-17, 2019. 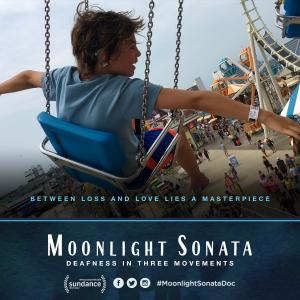 Here’s Irene’s story of how Moonlight Sonata came to be filmed:

I can hear, but deafness consumes me. I am a daughter of deafness and, now, a mother too. After I discovered my son, Jonas, was going deaf as a toddler, my sound designer
told me we could reproduce his gradual disconnect from hearing. As a filmmaker, that enthralled me. As a mother, it frightened me.

I’ve been down this road before. My first feature documentary, Hear and Now, about my deaf parents’ problematic journey into the world of sound, showed me how much film can be a catalyst for empathy. Creating a first-person narrative about the people closest to me was particularly challenging, at times painfully self-aware. But the honesty impacted me and my audiences.

The film went on to win the Audience Award at its 2007 Sundance Film Festival premiere, a Peabody Award and debuted on HBO. My parents and I were invited to present the film across Europe, in Korea, Abu Dhabi, and Russia. People approached us at screenings, and wrote letters afterwards, sharing their own feelings of isolation, the desire for connectedness and their newfound understanding of deafness and all that it encompasses.

So when my son told me he wanted to learn the Moonlight Sonata, composed by Beethoven as he went deaf, I was cautious but resolute, and began filming. Then, my father developed dementia, and soon their three storylines revealed an eerie parallel.

Paul’s loss of mind was a clue to what Beethoven might have felt losing something so precious to him. As Jonas learned to play the sonata, I read Beethoven’s letters and listened to his canon over and over again. I felt assured that my son could find his own true expression, shaped by deafness, just like Beethoven did.

What excites me most about Moonlight Sonata is our use of cinematic tools to delve into the senses. We portray sound and memory through animation, and we use vast archives of home movies, verite footage, immersive soundscape and original score to craft a rich mosaic of what it means to find vital expression in the midst of loss. 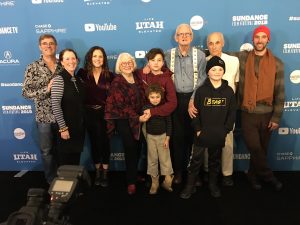 This film is also rooted in music and the way we hear. We have curated an eclectic palate of sound and music, from 18th century Beethoven sonatas to contemporary hip-hop. Our sound designer – my long-time collaborator with whom I have won an Emmy for sound and music – sparked the sound design concept for the film, including tracking the loss of Jonas’s hearing, which plays an integral role in the film’s sensory narrative.

Our composer, Dylan Stark, is both a DJ and a classically trained pianist, who co-created the original score for the Oscar-nominated documentary, Life, Animated (2017). For this film, Dylan has created more than music, he has created an aural landscape integrating melody, tones and riffs on Beethoven’s most well-known sonatas. Our other musical contributors include the choral, aptly Austrian tones of The von Trapps, who are the direct descendants of The Sound of Music’s famous family, international concert pianist Hunter Noack, and beatmaker Lazerbeak of the renowned Midwest hip-hop collective Doomtree.

Hands & Voices Co-Director of Deaf and Hard of Hearing Infusion sat down to talk with Irene about her parenting journey: