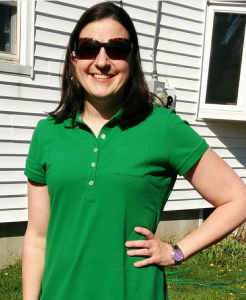 In 2014, at the age of 33, I was at my wits end. For the previous four years, I had struggled with single-sided deafness from what may have been a viral infection.

The CROS hearing aids that I purchased were of no benefit, nor was a bone conduction device. I resigned myself to the fact that I would only be able to hear out of one ear for the rest of my life.

As a high school history teacher, I struggled, particularly determining what side of the room voices were coming from. This was especially difficult because high schoolers tend to just ask questions or make statements without always raising their hands. For example, if a student would ask a question on the right side of the room, I would turn to the opposite direction of the class trying to locate who needed my help. Students would ask questions and I would frequently have to ask them to repeat it. This is particularly difficult when students were working in groups.

It was so frustrating to only have half of my hearing. I never got used to it. Every day was frustrating and exhausting.

While my husband was supportive, there were times that he was frustrated with me because he had to repeat himself over and over again. Friends would also get annoyed with my hearing loss. I will never forget one time when I asked someone, who was aware of my sudden hearing loss, to repeat himself two times and he just said, ‘forget it’ and walked away from me. It was so hurtful, but there was nothing I could do to make my situation better.

Faced with the daunting prospect of another frustrating school year with no hearing, I again reached out to an audiologist in Rochester. This time, I was presented with the surgical options of bone-anchored device or the possibility of paying for a cochlear implant out-of-pocket, which was financially out of the question.

At the urging of my husband, I looked at clinicaltrials.gov and found the University of North Carolina/MED-EL clinical trial for cochlear implants and single-sided deafness. After corresponding with the study lead Dr. Margaret Dillon, I traveled to Chapel Hill from Rochester in October 2014, was admitted into the trial and was implanted at UNC in December 2014.

After missing a few weeks of school, I returned in January to sound that kept improving as I got used to the CI. Sound localization and ease of hearing were huge improvements. Data from UNC indicated that my localization skills are that of someone with normal hearing. Much to their astonishment (and sometimes dismay), I have caught my students talking from the corner of the room!

Going through with the surgery has been, honestly, the best decision I have made for my health and well-being. I guess you never know how valuable your senses are until you lose one of them. Losing my hearing was disorienting, isolating, frustrating, and exhausting. I have been given the greatest gift by getting the cochlear implant. Dr. Dillon, the UNC team and MED-EL have given me hearing again. I am not sure how to put the importance of that into words. I don’t think I can.

A note to parents of children with UHL: Children with UHL are encouraged to learn about their hearing status by their parents, educators and audiologists. It is part of building self-determination and self-advocacy to understand one’s hearing status and how it affects learning and communication on a daily basis. There is a list of frequently used accommodations including flexible seating, visual supports, repeating or rephrasing the comments of others, notetaking and others at http://www.handsandvoices.org/pdf/IEP_Checklist.pdf. Consideration of cochlear implant and other hearing devices can be discussed with your pediatric audiologist and other team members.