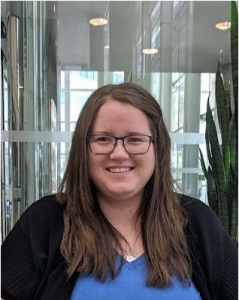 Laura Schauer at an awards ceremony for her mother, who helped implement the use of clear hospital masks for patients with hearing loss to help lip read.

My name is Laura Schauer and I’m an adult with bilateral cochlear implants. I have a long story regarding my hearing loss. I was diagnosed with Enlarged Vestibular Aqueduct Syndrome (EVAS) at three and half years old. This was before newborn hearing screenings were mandatory in the USA in my state, which is why I was identified late to today’s standards. My hearing loss consisted of a moderate rising to normal mixed hearing loss in one ear and a severe sloping to profound sensorineural hearing loss in the other.

In retrospect, there were some signs of hearing loss before I was diagnosed, such as the fact that I would often not repeat the ends of words. The word “hot dog” became “haw daw”– but I was a silly child in many ways, so it seemed that my playing with how words sounded was part of that silliness. The event that led my parents to really think there might be a concern regarding my hearing was how, as a three-year-old, every time I sat in my car seat, I would bug my mom to adjust the rear-view mirror until it was “just right”. When my mom inquired as to why, I responded that it was so that I could see her mouth when she was talking when I was sitting in my car seat. This led my mom to argue with my primary care doctor that I needed a hearing test, despite him telling her that I heard just fine.

It was a very painful time emotionally for me as I never knew when my hearing would fluctuate. I would be at school hearing “normally” for me and I would hear a high-pitched tinnitus (ringing in the ear) and about five minutes later, I could hear absolutely nothing. As a result, I ended up missing about four months of school over my sophomore and junior year. It was a very lonely and hard time since I was away from my friends and I had to take some medications with undesirable side effects to try to “save” my hearing. I was probably one of the few teenagers that actually missed going to school. I was constantly worried that I would wake up one day and I would no longer be able to hear again. One of the hardest parts was that I felt there was no one who truly understood what I was going through. I always focused on the good and focused on the hope in the situation, but looking back years later, there’s a grief that comes with losing your hearing. It’s a loss of one of your five senses and a loss of communication with those you love most. It took awhile for me to fully realize this and longer to help work through the emotions there. 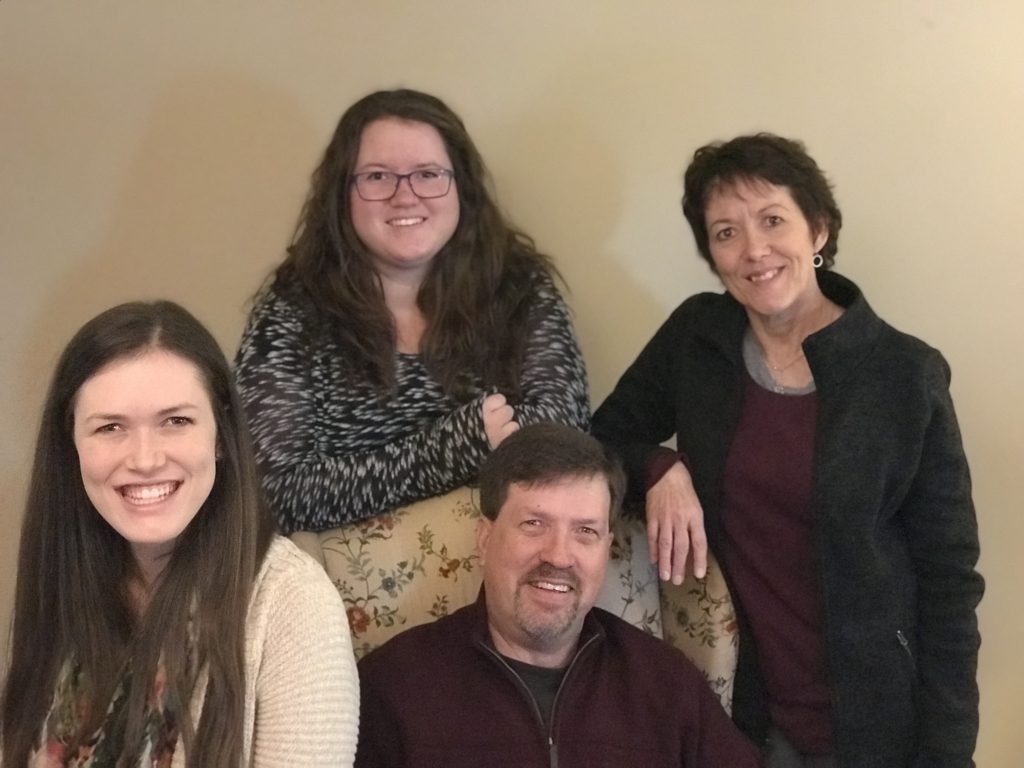 My parents, sister, and I. They have been my biggest support through my hearing journey.

During this time, I had my originally non-functioning ear implanted with a cochlear implant while my “good” ear was fluctuating. I had the thought process of “What do I have to lose?” I had not heard much of anything in that ear in about 15 years, but my audiologist had hope when I got one word right on the speech testing she performed for cochlear implant candidacy in that ear. Surprisingly, that ear performed much better than expected and I gained about 80% speech understanding in a quiet environment in that ear.

Growing up, I started out using services in the classroom such as a FM system, preferential seating, speaker systems, a paraprofessional, etc., but midway through elementary school, I chose to stop using all DHH services other than preferential seating. This was due to the DHH program saying they felt I didn’t need the services, as well as myself saying I didn’t need the services. I also had a hard time being labeled as “different”. I kept this viewpoint through high school, and not until I went to college did I learn to accept myself as a person with hearing loss. Looking at back, I wish I could have accepted then that it’s okay to have a hearing loss and that those who viewed me as different in a negative way weren’t people I wanted to be friends with. While using no services probably made things harder for me in school, I do think not using a lot of services forced me to me more innovative in how I got information and learned for me to fend for myself. I still maintained high grades, but I wish now that I could have been more open about my hearing loss and felt comfortable telling my teachers if I didn’t hear something or advocated for myself more. I think it would have allowed to have a better self esteem and to not miss out on quite as many things.

One thing I did notice is that after I got my cochlear implants, I became a lot more outgoing and I realized how much I was missing with just the one hearing aid. I once was very shy and didn’t talk much, and now I am much more outgoing, though I do still notice I have some difficulty with social situations. 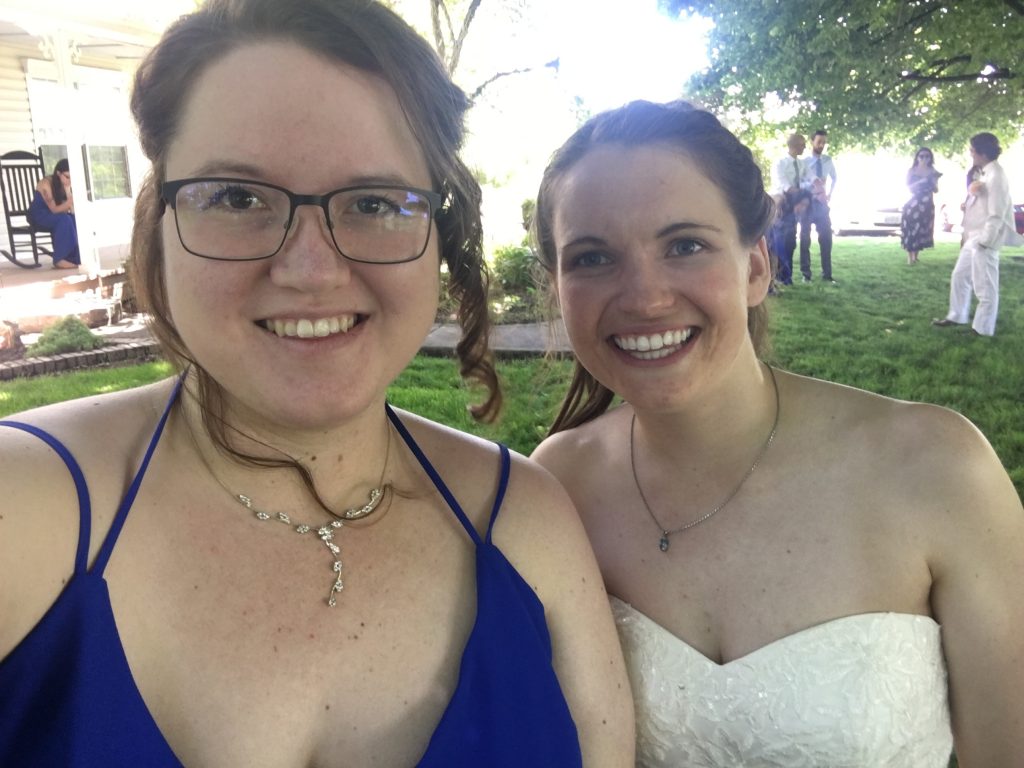 My college roommate and wonderful friend. We learned American Sign Language together and it was something that brought us together and still is something we share. Finding a friend who thinks your cochlear implants are awesome is a friend worth keeping.

After receiving my cochlear implants, my cochlear implant audiologist kept telling me that she thought I would be great as an audiologist. I loved to watch her program my cochlear implants and was always asking questions. With her encouragement, I ended up applying to graduate school and am currently in a doctorate program for audiology! I feel like my past experiences with a variety of different hearing losses and devices helps me be compassionate with my patients I see now, helps me learn information quicker, and provides me with some different perspectives. I am three years into the 4-year program and am wanting to work with cochlear implant patients and help them to get the most out of their cochlear implants or to help them decide if a cochlear implant is the best option or not for them. Over the years and through all the people with hearing loss I’ve met, I’ve learned that each person is on their own hearing journey and that their communication methods and technology they use may be different than my own. If that person feels they are the happiest with the decision they make, that’s all that matters. I’m a huge advocate in helping those with hearing loss succeed in life with whatever technology and/or communication methods they choose to use. 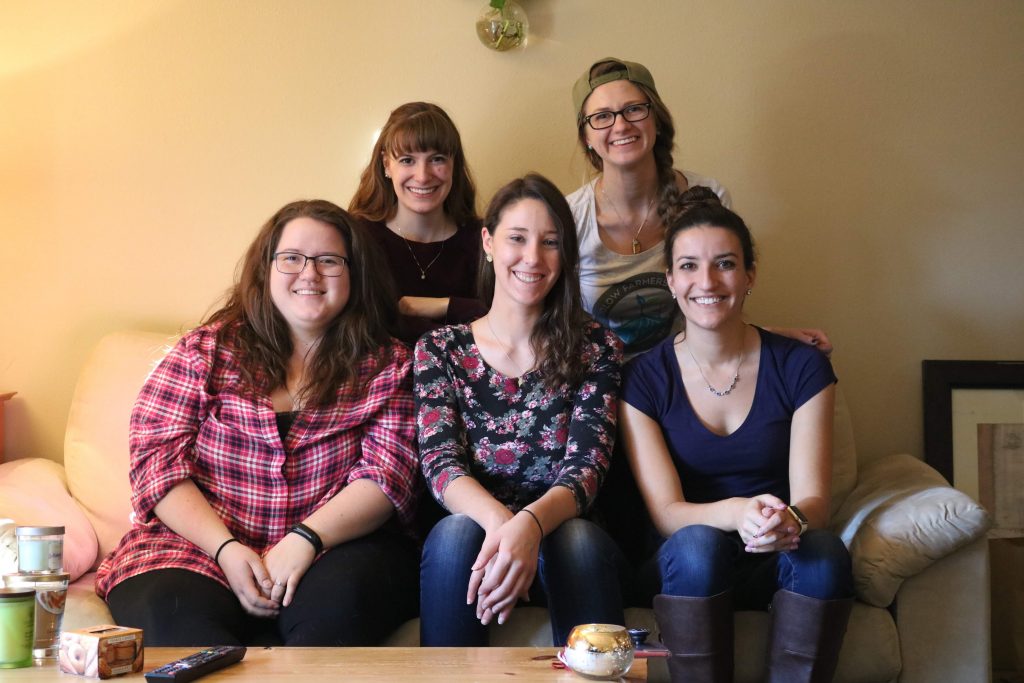 Four of my fellow audiology classmates and myself. Some of my closest friends and support systems who have always been 100% understanding and accommodating of my hearing loss.

One piece of advice I would give parents of children who have a progressive hearing loss would be to let them have someone to talk to – whether that be finding someone who went through something similar or to explore having a professional to talk to. Children and teenagers don’t always recognize the emotions they’re feeling and may be resistant to talking with someone (especially a counselor), but a loss of hearing is a grieving process. Advice I would give a child/teenager who may be losing their hearing would be that it’s okay to grieve the loss of their hearing and that it’s okay to accept help. Don’t lose sight of what you can make of yourself, especially through painful trials in your life. Sometimes those difficult times can become a huge part of your life. Mine did. I do not think I would be pursuing audiology as a career if it weren’t for my own hearing loss journey.