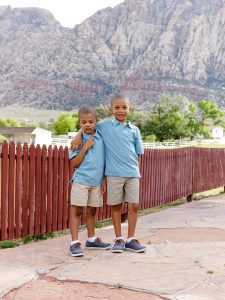 I have heard that oftentimes the first deaf or hard of hearing person some people meet is their own deaf or hard of hearing child. While for us that wasn’t the case, we had a similar experience, but with a different diagnosis. We have two boys who are both severe to profoundly deaf and bilateral cochlear implant users. Our youngest, also has Autism.

We knew one person with Autism. All we knew of Autism was what we saw in that one individual. I remember telling myself things like; no, our youngest doesn’t have Autism. He doesn’t act the same way or do the same things that person does. I think it’s just that we don’t socialize him enough since his big brother started school. His progress, or lack thereof, in speech is fine. We were told that not all children with cochlear implants progress at the same speed. The professionals advised us to not compare his progress in speech with his older brother’s progress. 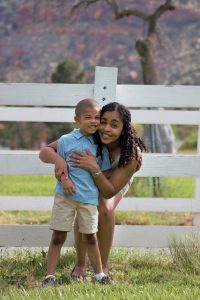 A common question asked in our home is, “Is it the Autism, the hearing loss or just him being a kid?”. Our son was diagnosed as “Moderate” and “High-Functioning” on the Autism Spectrum. He is also non-verbal but uses some ASL and the Picture Exchange Communication System (PECS) to communicate with us. Over the years his receptive language skills have blossomed. Most days he wears his CIs with no issues. Other days, he knocks them off as if they are causing discomfort. It is often hard to determine whether or not he is having a sensory moment because of the Autism, being a “typical” child who is having a moment of defiance, or if there is something wrong with his CIs.

I like to say there is a lot of troubleshooting that goes on with our son. Some days he is happy to put his CIs on, while others days it can be a bit of a tug of war. I have a hard time somedays making him put his CIs on because in some ways I feel like I am not being mindful of his Autism diagnosis and what effects the “silence to instant sound” may have on him. Because his expressive language is still progressing, it can be a challenge to know exactly what is going on with him. He can let us know in sign or with PECS that he is hurt, sad, calm, or silly and wiggly. But when it comes to expressing exactly WHY he is feeling those ways, we aren’t always sure. 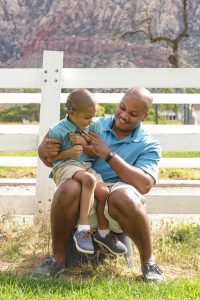 In the past, Logan has never really gotten a good “map” for his CIs and we think that is due to his Autism diagnosis. Getting him to reliably respond to any sounds he is hearing has been a work in progress. Before he was diagnosed, I dreaded going to the audiologist because it was a literal WWE match trying to hold him down just to run and impedance test. I can remember making sure that I wore clothes that would allow me to wrestle with him and not look completely disheveled after the appointment. Leaving those appointments, I would feel so defeated. I’d feel like I was a terrible parent for forcing him to go through the appointment. Then on the flip side, I knew that I wanted him to have as much good access to sound as possible because that’s what he needed if we wanted him to eventually use spoken language. For a number of years, all of his “maps” were manually made and set very conservatively.

Once we got the Autism diagnosis, things changed for the better. His behaviors all began to make sense. We started ABA therapy for him. His therapists have been quite accommodating in respecting our wishes of incorporating ASL in his therapy as a way of communication. Almost all of his therapists knew not one sign in ASL. Now, many of them have been inspired to learn more ASL and even use it with some of their other non-verbal clients. We’ve even had much better success at the audiologist! I can happily say that I no longer have to wear my “wrestling” attire to an appointment. With the help of his ABA therapists, we have worked on “mock audiology appointments” which have proven to be successful for Logan. He has gotten the best “maps” he’s ever had in his initial years of having cochlear implants. 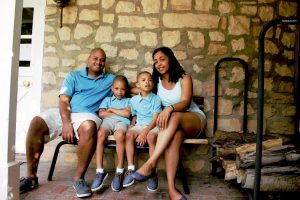 While things are progressively getting better, we still have our struggles. We are learning together as a family. It’s not easy to pick apart which diagnosis is causing whatever action, feeling or emotion he may be experiencing. All we can do is take it day by day and one step at a time. In all of those hours and steps, we revel in the fact that he is uniquely him and we love every little thing about him. It makes us stronger as individuals and stronger as a family. Even though we have had some hard days, it’s always nice to look back at those struggles and celebrate how far Logan has come. It’s a great reminder that despite our current struggle, we will overcome it together as a family. For that, we are blessed and grateful for this unique journey.