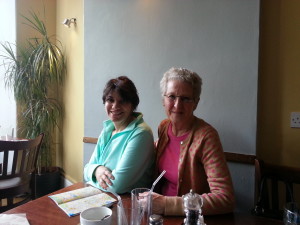 Growing up in New York , I had no real connection or knowledge of hearing loss, other than seeing students from Lexington School for the Deaf stroll down my block to get the bus going home for the day. My world was a hearing one, filled with music, overlapping conversations at the dinner table, watching tv and shouting with my friend as we played hide and seek. That world crashed for me in one morning when I woke to hear almost no sound – other than the muffled voice of my mother trying to talk. Her face pretty much mirrored my reaction to this new discovery – shock and confusion.

After seeing an ENT it was determined I lost most of my hearing due to a ruptured ear drum which had to be repaired so I would have some residual hearing left. The cause was connected with a recent plane trip to Disney World a few months back. My family remembered the pain I experienced when we were landing- and the doctor suspected this was when my ear drum burst. Slowly I was losing hearing…. it wasn’t a sudden loss but gradual. The fluid in the cochlear, which helps keep the hair waves moving, seeped out over a course of several months. My lack of attention to my environment was chalked down to being a kid who ‘wasn’t listening”.

Flash forward several months later- in an audiologists office being fitted for my first hearing aid. I thought perhaps this is something what would make me “hearing” again. It took a long time to accept the fact I would not hear the same way I was used to. I couldn’t listen to music and understand the words anymore, tv was lost to me and I couldn’t keep up with conversation. I did become more adapt at acting- school was a nightmare where I was placed in the front row to hear better with assistive listening devices that did me no good. But I smiled seemingly on cue, nodded appropriately to the lecture. This lasted pretty well (I wouldn’t say I was Oscar worthy, but I came close) until my grades came in. Three Cs, one D and a B which most likely was English. My reading abilities kept me from totally failing. Yet my teachers told my mother there was no cause for concern. My “C” grade was just as good as an “A” for a hearing child. My mother, having no comparison to fall back on, believe them. So went the story of the beginnings of my formative school career as the “Deaf girl that wouldn’t amount to anything”. Needless to say I didn’t try too hard in class- why should I when it wasn’t going to do any good I rationalized? Of course I know now I didn’t have the right accommodations to match my communication needs. It was easier to believe the “experts” in spite they never taught a child that was deaf. It was a crutch to fall back on; if I didn’t do well I could say it was because of my hearing loss.

My mother took me to Lexington for an evaluation to determine how I can adapt with my disability. They advised to keep me in my current school, depending on assistive devices (which didn’t work) and lip reading (which wasn’t foolproof as everyone learned afterwards. Even my acting skills couldn’t let me get out of that one). Since I spoke so softly, not being able to hear my voice as clearly, they recommended a speech therapist from the school to work with me several nights a week. With no other resources, my mother agreed and proceeded to sign me up for speech classes conducted at our home. So into our household came Helen – a slight, energenic young woman with a European accent that charmed the whole family. She was from the UK and decided to take a job in America for the experience. We established our one on one speech lessons – which was fun for me as I enjoyed having a visitor all to myself. Helen would join us for dinner after the class was completed. It was like having a relative with us, so often would we have her over. Our lessons lasted for about a little over a year, long enough for us to form a bond with her; she became like family. So when she announced that she was leaving to go back to England after finishing her tenure, I was naturally upset. I didn’t want to lose my friend, especially after losing my hearing and my life as I knew it growing up. She promised she would stay in touch with me, so we settled on being pen pals on opposite ends of the Atlantic, choosing Christmas to connect with each other about our life in the last year. This ritual continued for the rest of our lives.

During the times growing up after Helen left, I became more confident with my speech and lip reading, began meeting more Deaf and Hard of Hearing people, learning sign language and graduating with a Masters in Education with honors (guess I fooled those grade school teachers). Throughout those years we stayed in touch, during the course of my mother passing and my journey of getting a cochlear implant. Helen never was able to come back to the United States– and I couldn’t fly – a result from my accident from the plane trip. Doctors told us not to risk it again or I would lose what hearing I had left. After getting a cochlear implant at age 40, that opened a new opportunity for me in terms of traveling. I was no longer restricted to using a train or car as a mode for transportation. I believe my love for traveling really developed once I could fly again – and in the back of my mind I thought I could go to England and see Helen. So when I planned on a recent trip to London I wrote to Helen with my email attached, letting her know I will be there on vacation and would love to see her. I wasn’t sure she would reply as we hadn’t communicated the last two years. Would she want to see me, would she even be available? Was she physically able to see me? A few weeks later she sent me an email– and was thrilled I asked her. We continued to communicate electronically, making plans. I wondered how about this reunion, how we would get along, what common ground would we have other than our past history. So much time had passed – my life as a deaf person had evolved as well.

We agreed to meet at my hotel. That morning, I got up excited to think I would see her again. I carried a picture of her with me, not sure I would recognize this person I remembered as a child. As I got into the lobby – there sat Helen, at age 74, with the same slight frame, energy, and hair that had become grey with time. She looked up at me, smiled. “Kim?” she asked, her voice still strong. There was still that same comfort level, that rapport we had even now. We explored some of London, ate dinner, and essentially played catch up. It was wonderful to see her. Looking back I realized how much impact she had on my life; all those memories as I took my first steps toward shaping my identity as I struggled with a hearing loss. There are some people you are grateful to have, even if they only stayed in your life for a short time, Helen was one of them. As we were getting ready to depart, she told me how great it was to see me grown. “You became an intelligent, thoughtful young woman. I am so happy to see that,” she said. We continue to stay in touch, keeping that promise made 38 years ago. In life one of the things a person wants to know is if they made a difference in someone else’s life. So Helen- thank you for making a difference in mine. 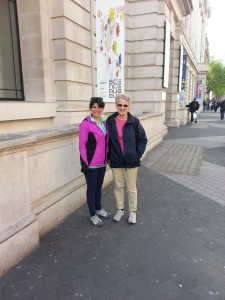 1 thought on “Kim Calabretta: Keeping in Touch with Someone Who Made a Difference”