Growing up, I never saw myself being the parent of a deaf child. Although my mom and brother are hard of hearing, it was never more to me than just part of  who they were. It wasn’t even that big a deal in my household.

The only deaf person I recall knowing aside from them was a friend from high school.  But again, it was just part of who he was.

After we started learning we wanted to know more. We became involved in a deaf ministry near our home and started taking classes through Sacramento State. 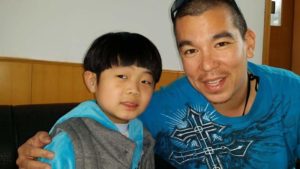 Little did we know, it would lead us to deaf adoption–and three years ago we brought home our son. Lots of time during our adoption process was invested in trying to figure out what was right for us. Everyone had an opinion. We even had some strong ones of our own, but that all changed the day we met him.

Suddenly it wasn’t about what was best for us, but what was best for him. It wasn’t about what we envisioned, but the potential we saw in him. Our first night with him he was so starved for communication that he soaked up around 65 signs.It was impressive  the amount of language he  gained in those first two weeks, after 8 years of minimal language.

At some point early on with us he discovered there were two worlds going on around him. Until he saw us signing with him and talking with each other, I don’t think he realized that sound actually existed.

He became enamored with the concept of sound and discovering how it works.

At that point we began to question our own biases. This was all unraveling as we watched a friend struggling with outside opinions of her son getting implanted. Was that a battle we even wanted to tackle?

We realized that no one had to answer to him but us, about what tools and opportunities we did and didn’t provide. We decided that any issue someone had based on a choice we felt was right for our child was not our problem, but theirs.

We opted for the implant and he was well on his way to discovering a world with sound. Unfortunately,  it malfunctioned a few months in, despite every effort to correct it.

We’ve since opted to do a 2nd surgery to see if replacing the internal equipment will correct the issue. We are optimistic, but no matter what we know we can stand before him and say “The only thoughts that mattered were yours. We followed your lead.” 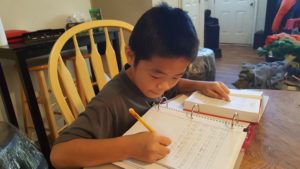 The most important things we’ve learned through this whole journey are:

Remember, we started signing with our oldest daughter. At the time, she was believed to have normal hearing. That has since come under question in the last year. The supports we provide for her aren’t the same as for our son.

There is no one size fits all. They have completely different needs and what would work for one isn’t as helpful (if at all helpful) for the other.

I encourage you to stay strong, be your child’s loudest advocate, and know that it is okay if you switch gears or make mistakes.

As parents of deaf children, we face challenges that most other people don’t have to consider in everyday life. The only thing we can really do right is to give it our all and hope for the best. Most of all, know that your best is going to be different from someone else’s and that’s okay. 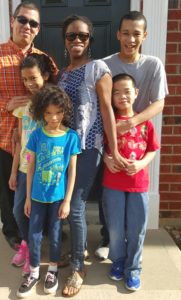